Uber Reptiles are a part of Boss Cass' main scheme in Ty the Tasmanian Tiger 2, he plots to kidnap mammalian denizens of Burramudgee to fuel their creation. They appear sparingly over the course of the game mainly appearing in missions and are prominent enemies in the final assault on Boss Cass' fortress.

These creatures can only be defeated with the power of a Bunyip or an upgraded Boomerang. 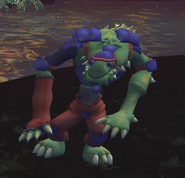 Add a photo to this gallery

Retrieved from "https://tygame.fandom.com/wiki/Uber_Reptiles?oldid=7980"
Community content is available under CC-BY-SA unless otherwise noted.