He was portrayed by Stig Wemyss in the first game, and by Greg Ellis in the second and third.

Ty was originally thought to be an orphan in the first adventure, because of the events that took place before the story narrated. He was found as a child and was raised by the Bilbies. During the opening of Ty the Tasmanian Tiger, Ty falls down a chasm while playing with one of the bilbie boys and discovers the Bunyips, who are large, half-spirit, half-beast creatures. They tell him that his parents were imprisoned by Boss Cass in the Dream Time and that he must find a way to free them. At the end of the game, Boss Cass is taken to prison for his crimes and Ty's Family is set free.

When the town of Burramudgee was under attack by Demon Fluffies, Ty, Sly, and Shazza got in their Bunyips to combat them, and prevent them from setting Boss Cass free from Currawong prison. Unfortunately, Cass gets out and sets up his own country of Cassopolis to claim diplomatic immunity to punishment for his crimes. Ty has little time to worry though, as he has to attend the opening of Bush Rescue, a newly formed force of outback dogooders. After facing down two of Fluffy's mechs, Ty uncovered a Data N.U.T. which he gave to Julius to discover Cass' plan to take over Southern Rivers with his mutant Uber Reptiles.

After living peacefully in his island nation of Cassopolis with Shazza, Ty is summoned again to help the Bunyips fight a new evil… the Quinkan. When Ty ends up six months into the future. He finds the new alien species have invaded Southern Rivers, destroyed Burramudgee and caused Bush Rescue to disband. All would have been lost if not for “The General”, the military leader that kept the remnants of society together. Now Ty with some help from unusual new allies, and attempt to turn back the Quinkan invasion.

Ty is now known as the famous hero that saved Southern Rivers countless times. Ty and his mates at Bush Rescue have regrouped. Their new H.Q. in town of Coolarangah on the shores of Lake Burramudgee reaches out to help those in need whenever they are in danger. Things have since been quiet since Cass set up a resort island of Cassablanca and “retired” there. Except strange, mysterious things are starting to happen around Southern Rivers like the shadowy figure that is said to have been seen on the outskirts of town. There’s a mystery to be solved for sure.But first Bush Rescue is out to help one of their friends move his Thunder Egg museum.

Ty is a all in all true hero, but he did not talk much in the first game, usually preferring one-liners. By the second and third game, his dialogue had become much more developed and he has shown to be over confident, but still very much heroic. However Ty is not always the best at making plans, infact unlike other video game heroes Ty is less of a leader. Ty makes up for it in compassion and the desire to do good 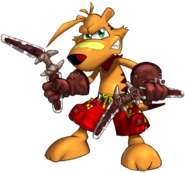 Ty in Ty the Tasmanian Tiger 2 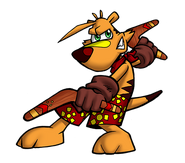 Ty in Ty the Tasmanian Tiger 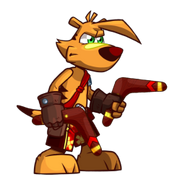 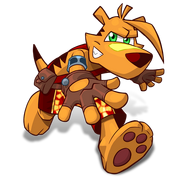 Add a photo to this gallery

Retrieved from "https://tygame.fandom.com/wiki/Ty_the_Tasmanian_Tiger_(character)?oldid=8348"
Community content is available under CC-BY-SA unless otherwise noted.