Shade is Shadow's daughter. She is half ghost bat and half flying fox.

She is seen in Ty the Tasmanian Tiger 3, standing around in Cassopolis. Unlike Shadow, she has a polite, kind demeanor, and usually offers apologies for Shadow's behavior in the past, and offers to help make it up to Ty.

She is also seen in Ty the Tasmanian Tiger 2 (GBA), having lost her Data Nut at South Beach.

"Hi, I'm really sorry about how my mom treated you back in the old days. She went a bit batty. But she's better now."

"It's really nice to have you here in Cassopolis, Ty, and I really hope we can be friends."

"If there's anything I can to do to help out with the Quinkan and all, I'd really like to help you to make up for my mom."

"It's tough being the only nocturnal animal in Cassopolis. I've had to learn to get up at bedtime, and to go to bed straight after breakfast. Then there's the walking around. Everything is all upside down."

"When I was in school, people always used to tease me. Especially when there was a game of Cricket on. When they were picking teams, they would always choose me and say that I could be the bat." 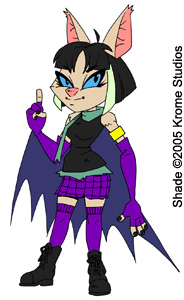 Retrieved from "https://tygame.fandom.com/wiki/Shade?oldid=8318"
Community content is available under CC-BY-SA unless otherwise noted.