Patchy the Cybersaur is a cybernetically enhanced dinosaur under Fluffy`s control. Equipped with steel plated armor, titanium spikes, and back mounted heat-seeking missiles, this is one formidable foe. He appeared in Ty the Tasmanian Tiger 2: Bush Rescue in Steele Springs, where Fluffy was looking for the Grid Processor. Ty interrupted her and Fluffy called Patchy to fight him. Later Patchy returned is fought in Cassopolis on the way to Boss Cass's Lair.

If you bought a Megarang, you can use that to hit him in his weak spots, which glow red. If you do not, you can use your lock-on ability or get lucky when you attack.

Patchy charges at you, attacks with his tail club and missiles launch from his back. The tail club creates a shock wave, which can be avoided by jumping.

When you fight him again in the climax, just blast him with the Shadow Bunyip's laser. 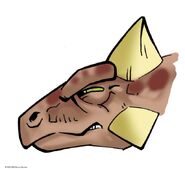 Concept art of Patchy's missiles
Add a photo to this gallery
Retrieved from "https://tygame.fandom.com/wiki/Patchy?oldid=8093"
Community content is available under CC-BY-SA unless otherwise noted.