Nano-bots are small machines that appeared three times in Ty the Tasmanian Tiger 2, each time as a boss. They appeared twice as small, yellow, spider-like robots that made up a boss called Buster.

The nano-bots were created by Boss Cass and Fluffy. Their ability to break up, fuse, and reform into different objects makes them especially hazardous to Boss Cass' enemies.

They serve as the second boss in Ty the Tasmanian Tiger 2. Once they are defeated, they sink into the ocean and swim away back to Fluffy and Cass, as it turns out that they were simply a distraction for Ty while Fluffy and Cass stole and important item from the factory.

Buster once more returned to fight Ty in the last level, though this time much weaker due to Ty's being in a Bunyip. As such, Buster went down with only two hits.

The nano-bots (possibly a different batch) appeared in the final boss battle, this time as green and purple, crab-like robots that would engage in a variety of attacks against Ty's mech, such as forming tornadoes. They eventually surrounded Boss Cass' hoverchair to give him a mech of his own to fight with, but were defeated. They fell into the lava below as Cass escaped the mech, and perished accordingly.

When they roar, him them in the mouth.In the final battle, let them punch the ground so therie arms get stuck. Walk up their arms and punch them in the head. 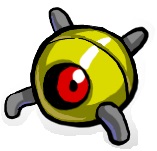 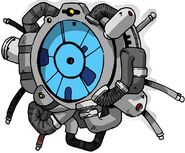 the weak point, or mouth of Buster.

The humanoid form, Buster made up of a large amount of nanobots. 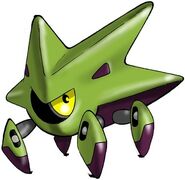 The nano-bots used by Cass. 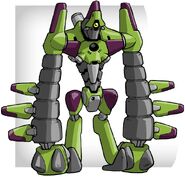 Cass' nano-bots taking the form of the mecha, Armstrong. 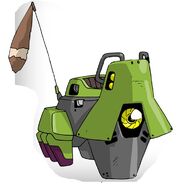 The hoverchair Cass used made up from nano-bots.
Add a photo to this gallery

Retrieved from "https://tygame.fandom.com/wiki/Nano-bots?oldid=7897"
Community content is available under CC-BY-SA unless otherwise noted.