Start a Wiki
Fluffy is a thorny devil lizard and Boss Cass' lead henchwoman. Later in the series, she assists Bush Rescue in their fight against the Quinkan, and starts to reform before making the ultimate sacrifice.

Fluffy is introduced when Ty locates the last talisman. In order to receive the talisman, he must defeat Fluffy in Fluffy's Fjord, where she resides in the head of an enormous mechanical yeti, seemingly controlling it. After losing the battle, she disappears into the night and is not seen again until Ty the Tasmanian Tiger 2.

Ty meets Fluffy once again immediately at the beginning of the adventure, where she is seen in her Bunyip attempting to free Boss Cass from prison. She reoccurs multiple other times throughout the story in boss fights when Ty has to confront her when she starts stirring up trouble. The majority of the time, she fights in her Bunyip suit, but she uses other technologies as a form of defense such as nano-bots and Patchy the Cybersaur.

During Ty the Tasmanian Tiger 3, while she starts out as a nemesis, she quickly begins to warm up to Ty. They find themselves working together for the good of Southern Rivers, which begins to change her for the better. She eventually comes to consider Ty a friend, though also mentioning that he should look after himself; Ty's rebuttal is that friends look after eachother.

After Shazza had been kidnapped by the Quinkan, Fluffy was pushed by Sly to help find her, although it would require them to seek aid from Boss Cass himself. After Ty defeated the monster that captured Shazza, Fluffy aided in their search for the expert of the "shadow stones" required to power the weapon needed to destroy the Quinkan leader Quinking, showing signs of change and remorse over her previous actions. At one point, she even told Ty that she wasn't worth saving from any predicament, although Ty begged to differ.

This friendship is proven true when Boss Cass opportunistically tries to kill both Ty and the Quinking with a shot of his special weapon; Fluffy sacrifices herself to push Ty and Quinking out of the way, blowing him a kiss before she is vaporised. However, her final act destroyed the Quinking (and by extension, all of the Quinkan). Following Cass' defeat, Ty commemorates Fluffy as a hero, feeling intense sadness over her death.

However, a secret cutscene shows Karlos and his friends to have found her tail, still alive, claiming that he could bring her back to life via cloning the remains.

Fluffy seemingly comes back, after apparently becoming evil again. Ty is surprised to see her alive, setting Ty the Tasmanian Tiger 4 before Boomerang Blast. However, after the boss fight, it was revealed to not be the actual Fluffy, but a robot Fluffy; it wasn’t until Boomerang Blast that the real Fluffy would return.

She managed to regenerate from her tail segment, as she is available as a playable character.

Start out by throwing your Flamerangs at the body of the Yeti. The arms, the legs and the torso should catch fire and melt off reveling a robot underneath.

Search around for a gas pipe, they should shoot fire from them occasionly. Stand behind one and throw your flamerangs through the fire at the robot. Keep doing this until the robots health is empty.

Afterwards, take your Frostyrangs and throw them at the robots head. A cutscene will follow. 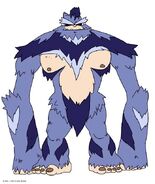 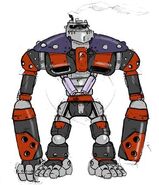 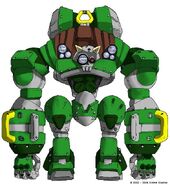 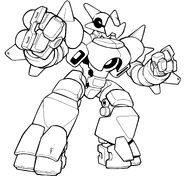 Fluffy's newest mech in Ty the Tasmanian Tiger 3, the Ultra Fluffy Gamma.
Add a photo to this gallery
Retrieved from "https://tygame.fandom.com/wiki/Fluffy?oldid=8303"
Community content is available under CC-BY-SA unless otherwise noted.