Elle the Platypus is Rex's girlfriend and first appears in Ty the Tasmanian Tiger.

Elle is a beach babe. Traditionally speaking platypi are freshwater creatures, but Elle has taken to the surf like a seagull to water. - EnTYclopedia

In Ty the Tasmanian Tiger, Elle appears first in Ship Rex. In Ship Rex, Rex teaches Ty to swim and then asks him to go find his girlfriend, Elle. When Ty finds Elle she gives him a red thunder egg as a thank you. She is seen again in with Rex trying to steal treasure from an abandoned mine.

In Ty the Tasmanian Tiger 2 she appears during multiple missions she assigns Ty such as: delivering sunscreen to Rex, rescuing Rex from a sunken ship surrounded by sharks, and hiring Ty to fix the oxygen pipes to an underwater science lab.

While Rex makes an appearance in Ty the Tasmanian Tiger 3, Elle is nowhere to be seen.

Elle is a kind female platypus. She is very friendly towards Ty and nicknames him "darl." Her personality can be considered lovable since she is very affectionate towards Rex. She has a high-pitched and breathy feminine speaking voice.

She has light brown fur as opposed to Rex's dark brown fur. Her bill is a burnt orange color. She is typically seen wearing beach attire since she and Rex are always found near the ocean. 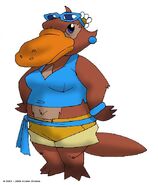 Add a photo to this gallery
Retrieved from "https://tygame.fandom.com/wiki/Elle?oldid=7663"
Community content is available under CC-BY-SA unless otherwise noted.