Start a Wiki
Cy the Cybernetic Tiger 1024 is a model in the Cy line created by Julius to replace the previous model. Cy 1024's first appearance was the secret ending of Ty the Tasmanian Tiger in a short scene lasting a few seconds, with his eyes flickering to life.

He is later found in Ty the Tasmanian Tiger 2 as one of the enemies fought in Julius' Training Ground. Ty must avoid the boomerangs he shoots. He's also found during cart races, also as a playable racer.

In Ty the Tasmanian Tiger 3, Cy is located in the western sewer area of Cassopolis, all alone and apparently surrounded by sewer monsters. He is once again a playable character in the Cart racing mini game.

Julius built a replacement model for CY512 called CY1024 in hope of using him as a weapon against Boss Cass. Unfortunately, the only piece of hardware that was upgraded was his joke telling circuits. - EnTYclopedia 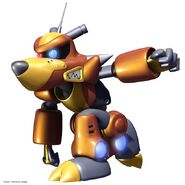 Cy and Ty during cart races
Add a photo to this gallery
Retrieved from "https://tygame.fandom.com/wiki/Cy_the_Cybernetic_Tiger_1024?oldid=7775"
Community content is available under CC-BY-SA unless otherwise noted.